The scope of the architectural design was a reconstruction of the existing clinic building and addition to it a new building as a residential part.

The main entrance to the residential part of the building, from Grochowska street, is located on the symbolic junction of historical tissue (clinic building) with the new cubature of residental builiding added to it. On the same side of builiding, there are also storefronts of newly designed service premises with entrances to them. Through their height, the storefronts, try to refer to the door portals of the existing clinic builiding.

Designing the shape of the building took place in reference to two basic contexts of the place. First, the context of the city – the downtown area with the one of its main communication node as well as the context of existing buildings – a clinic as a part of the history of this district.

These seemingly and contradictory contexts appointed the main directions of thinking about the architecture of the designing object.

On the one hand, designed building has to match the dimenstions and the scale of existing frontage of the street, fill the gap in it`s organism and define the broadly understood architecture of the downtown of a large city, but on the other hand, located in the immediate vicinity and the interface of a low, two-level building of an existing clinic, it cannot dominate or overwhelm it with its character and form.

In order to properly emphisize the building and at the same time maintain the character of a modern townhouse, we have been used some architectural methods.

Firstly, the front elevation of the existing clinic was recreated, based on historical sources and photographic material. In the scope of work has been restored such elements as: the original arrangement of balconies, the original shape of the cornices, window bands of the three central window axes and the gable above the cornice.

Secondly, the planned superstructure was shifted back in relation to the historical facade, so that it constituted the background for it. The local zoning plan, allows 60% of the facde area to be keep in the line of existing builiding and thus allowing to shift back 40% of its. Above the existing building there is a terrace for tenants of the residential part.

Thirdly, the architectural expression of the building has been minimized. The newly designed facility is as ascetic and restrained as possible in form and detail, which separates and emphasize the details reproduced in the existing clinic. The front elevation stands out only with an elegant rhythm of the proportions of windows, loggias, walls and balconies. The consistency in arranging the mesh of the holes as well as interlacing them with gently retracted loggias of the bungalows allows to play chiaroscuro on the southern facade, which makes it more tectonic in its expression. In the same proportion as the windows and loggias, in the withdrawn part of the outpatient clinic, balconies were extended to its front. Thanks to this, the building wtih the withdrawn frontage catches the opitcal connectivity with the rest of its body and keeps the line with the facade. 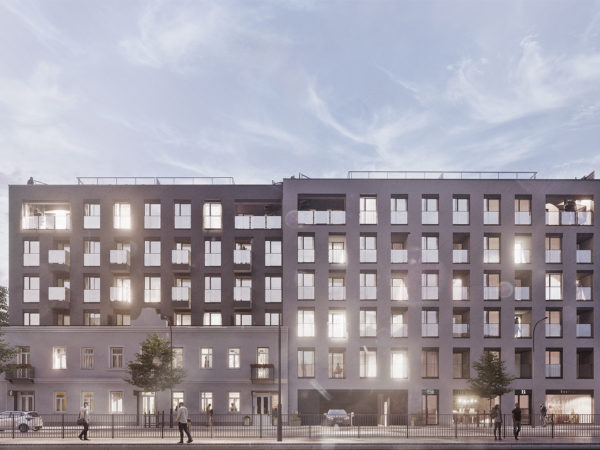 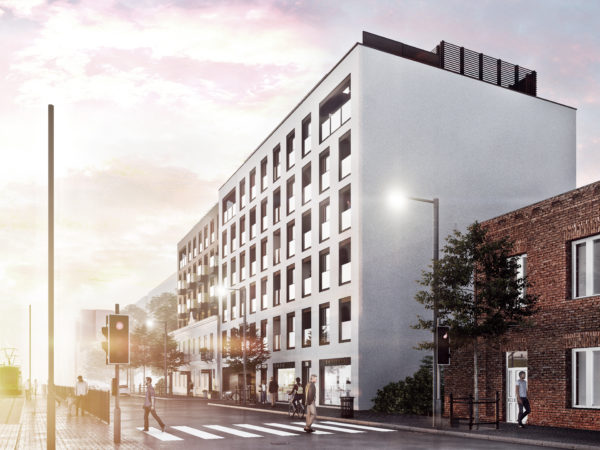 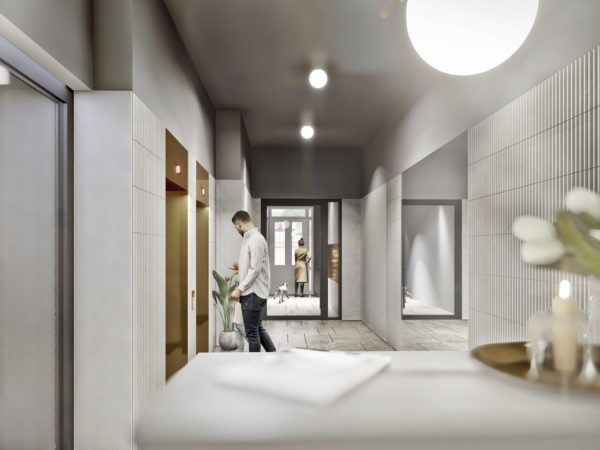